This blog post will describe how to measure the execution times of applying tsfresh’s feature extraction on various different time series and discuss the results.

Most computational calculations take time. How much, depends on various factors: how much IO is involved? How many CPU cycles are needed? How good is the utilization of the cache? The number one rule when optimizing the speed of a program is: measure the execution time. There are multiple reasons for this:

Today, this post will focus especially on the last aspect and use tsfresh as an example: what is the execution time of the feature extraction depending on the input data?

tsfresh is a package to automate the extraction of relevant features of time series. A time series is a series of (typically measured) numbers, which show some sort of time dependency (even though the functional form of the dependency is often unknown). Good examples of time series are stock market prices or the measurement of the heart rate of a patient over time. A feature of a time series is a single number, which describes a particular characteristics of a time series. For example the maximum and minimum value of the measured heart rate over time can be an indication for certain heart diseases. Using many of these features together, it is for example possible to train machine learning models for classification or predicting future time series values. More information on tsfresh and how it works can be found in our documentation.

However, extracting those features takes time - especially as some of them are computationally complicated. But how much time? That depends on the amount of data you put in, how many cores you use and which features you extract. Let’s see how this all comes together.

For this study, we want to extract the execution time of tsfresh depending on various input values:

In general, the measurement process can be divided into three parts:

As the number of input parameter combinations we want to test is large, we use a workflow management tool for this. In this case, I used luigi. We will not go into the details of the measurement script, but you can find it here on github.

For a reproducible and well-defined result, all calculations were done on a e2-standard-4 google cloud compute instance. You can easily create the results by yourself, by creating a compute instance, installing the needed packages and cloning the tsfresh github repository (but attention, the measurement will take some time!):

Make sure you have your google cloud account ready and the google cloud SDK installed and set up correctly. The final results of the measurement will be written into results/result.csv.

Before we come to the absolute numbers, let’s first have a look into the scaling behavior depending on various input parameters. For all shown measurements, I used input data consisting of purely random numbers. In principle the shape of the input data can also have a large impact on the time spent in feature extraction. However, it is basically impossible to test out all different input data distributions, so I choose random data as a compromise.

The measurements use tsfresh on commit 85ad39b, which will soon be included in the upcoming release 0.16.0.

Scaling with number of time series

In tsfresh each input time series is treated independently. This means if you feed in the series of stock market prices of Apple and Facebook, the feature extraction will happen separately on both. In the nomenclature of tsfresh, different time series will have a different identifier (or id). Therefore the expectation should be clear: if you input 10 times more time series, the execution time should be 10 times higher. 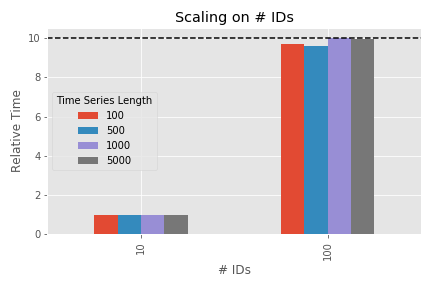 The figure shows the time spent in feature extraction for 10 and 100 input time series for different lengths of the time series data (100, 500, 1000 and 5000) - relative to the execution time of 10 time series. So the bar at 10 has - by definition - a height of 1 (and is just shown for reference). The measurement was done on a single CPU only.

As 100 ids is 10 times higher than 10, we expect a 10 times higher execution time. That is the case - except for small time series. Why? Because for very small amount of data the overhead of the input and output data preparation tsfresh needs to perform (e.g. grouping, sorting, transforming) has a higher impact on the total execution time. As this overhead is approximately constant, it does not play a large role for large total execution times (which is the case for large amounts of data). This means, with “reasonable” long input data, the overhead is negligible and more time series means linearly more execution time. So far - so expected.

The next parameter we can tune is the number of cores we use. The execution engine we used has 4 logical cores or 2 physical cores respectively (see here for the difference between logical and physical cores). Therefore we expect to double the performance when moving from single- to multiprocessing. 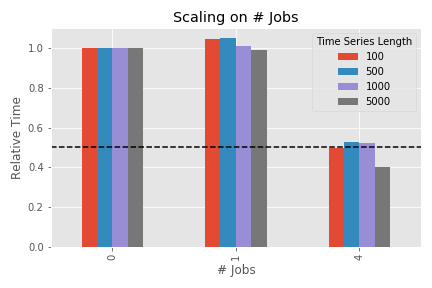 The shown figure is similar to the one before, but this time not the number of time series is changed but the number of CPUs used in the calculation. “0” means strictly single processing, “1” is multiprocessing on a single core (this means: the overhead of multiprocessing but without expected speedup) and “4” means all (logical) CPUs are used. Two anomalies can be seen:

So in general: doubling the number of physical cores will give you a doubled performance (plus some extra boost due to hyper-threading).

Now comes the last aspect: the size of the individual time series. One could expect also here: doubling the data means doubling the execution time. Now quite correct. Some of the calculated features need to perform operations such as folding the time series with itself, which do not scale linearly with the amount of data points. 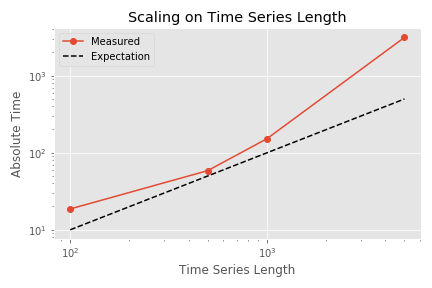 This figure shows the total execution time for different time series lengths (with single processing and 100 input time series). Please note the logarithmic scales on both axes. The execution time grows faster than expected and clearly faster than the shown linear expectation. This is due to the non-linear scaling behavior of some of the features, which is described above.

But which features are those? The next figure compares the execution time for an input length of 1000 and 5000 for each feature separately. If the feature scaled linearly with the input data, the increase should be a factor of 5, which is shown as dashed line. Click on the graph for a higher resolution. 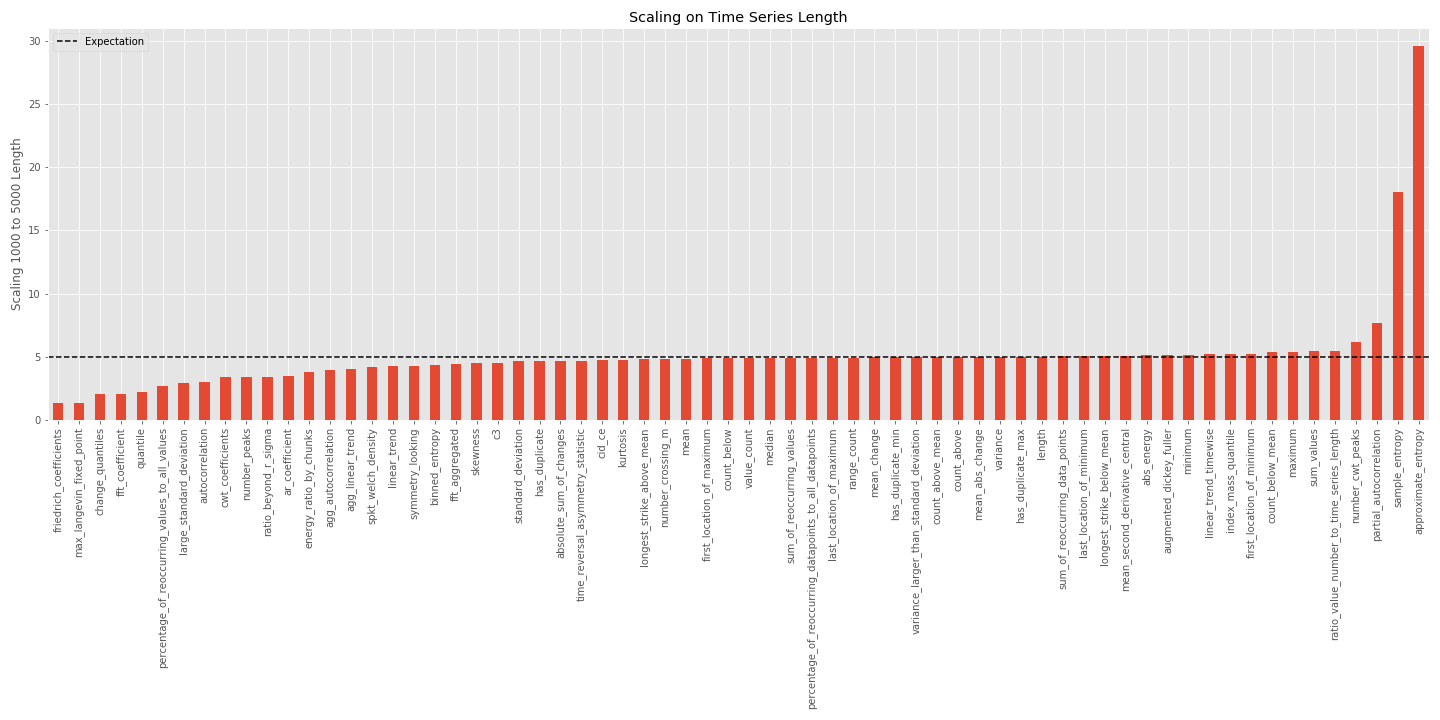 It can be seen that most of the features scale linearly. The two dominant exceptions: the entropy features. Simplified, these features involve a calculation in the form

which scales quadratically with the number of data points (the details are probably a bit more complicated, but do not really matter here).

Now, what happens if we remove the worse-than-linearly-scaling features? The next figure shows the scaling behavior without these “slow” features. This setting is called EfficientFCParameters and can be tuned using the feature extraction settings.

Due to the shorter total execution time, the small time series execution times are more influenced by the constant overhead terms involved in the calculation. But for higher lengths, the extraction time is now approximately linearly scaling.

Here are the execution times for all features (or only the ones in EfficientFCParameters) for a single time series ìd of different lengths and a single CPU, measured on a e2-standard-4 google cloud VM instance (specs):

As a rough first guess, you can calculate the expected execution time using this empirical formula:

As seen above, the scaling behavior with the efficient features is nearly linear, so it can be estimated with